born in 1968 in Montreal, Canada, lives and works in Perpignan, France.

In her work she values time, a direct engagement with the space and process action, allowing her to develop many perspectives at once.

For the last fifteen years, Martine Viale has been offering intensive workshops in Montreal, Canada as well as in Chicago, France and Brussels and more recently in Catalonia, Spain.

Since 1999,  her work has been presented in several festivals, galleries and site specific contexts throughout Canada and the United States as well as in Poland, Israel, Brazil, Cyprus, Serbia, Scotland, Spain, The Philippines, France, Belgium and Denmark. Her work has also been featured in performance art focused publications such as Contenedores, Muestra Internacional De Arte De Acción-Una décida de performance en Sevilla (2001-2010) a project curated by Rubén Barroso, Sevilla, Spain; Caught in the Act, an anthology of performance art by Canadian women, edited by Johanna Householder and Tanya Mars, Artexte, Édition, Montreal, YYZ Books, Toronto.

“Anchored in a practice of presence, my work aims to create installations grounded in performance. More recently, I have been focusing on creating works in the public space and unusual places that can facilitate unpredictable encounters with passersby. Through this process, I prioritize the momentary loss of bearings and the use of actions as a tool for examining personal and social conditionings. The body in action is at the centre of my practice. All elements are in connection, I activate objects and/or matter and I am activated by them; the space is resonating and my body is part of it. I approach materials and objects as a support for my actions, which remains the most important part of the composition.

Working mainly in a durational format, I am inspired by the interval between art and the everyday and the multiple points where the two can intersect.

I use time as a driving force,

I use time as persistance

I use time as a tool for spacial and relational negotiation.” 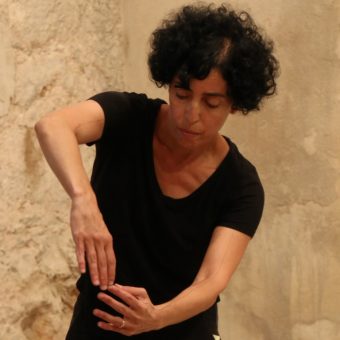