professor of Performance Art at the University of Arts in Poznań.

The author of drawings, objects, installations, performances and street actions. Co-founder of the Pracownia artist collective (1976-1981), co-manager of the Pracownia Gallery at the Dziekanka Student Art Centre (1976-1979) in Warsaw. Member of the Akademia Ruchu theatre group since 1979.

Janusz Bałdyga’s main line of artistic activity is performance art. Over many years of practice, he has developed a unique style, characterised by a reduction of the language and means of articulation and the use of simple elements such as planks, nails, ropes, water, textiles or glass, which he uses to create elementary structures: the line, the circle, the rectangle, the point. He has introduced the term “marked places” to denote space and its determinants, and the dynamics lent to it by human presence. The artist’s body serves also as a construction element, an instrument of
describing the surrounding space, a testimony of wrestling with matter (Inclinations, Attention, Border). Balancing around a critical point and attempting to reveal a sphere of latency are inherent to Bałdyga’s work. 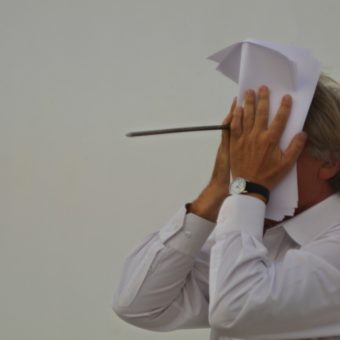